The Gracie’s Guardians and Ring Dog Rescue are both non-profit organizations who aim to provide rescue and assistance to every dog in need. Together, in a joint effort, they were able to raise some funds to pay for a life-saving treatment because a dog owner couldn’t afford to pay the cost of her dog’s hospital fees.

In just one day, the PayPal Fundraiser that the organizations started reached the needed amount. Around 200 kind-hearted people donated on their cause, and they got more than 3,000 dollars in total.

The Gracie’s Guardians posted a thank you message for everyone’s contribution. They also gave an update that everything was going well and that they already put a stop to the fundraiser because they’ve already reached their goal.

The fundraiser was all for the heroic dog named Chako. He was a loyal and devoted pup who saved his owner’s life in an incident that happened during Halloween. His dog mom was very thankful for having Chako because if it were not for his bravery, she could have ended up on her death bed.

The incident happened on his owner’s residence in Richmond, Virginia. The heroic dog stepped in when he saw that his mom was being assaulted and attacked by his partner. The guy was violent and abusive and maybe because of the dog’s intrusion, he furiously aimed at Chako. 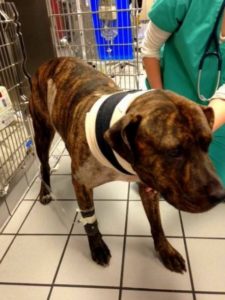 Chako endured a total of 12 stab wounds, mostly located on his neck and chest area. Luckily, his dog mom was able to bring him to the nearest animal clinic where he got treated. According to the vets, despite his fatal wounds, the brave dog will soon be able to recover from all his injuries.

On the other hand, the dog’s attacker got seized by the authorities. He is now facing criminal charges because of what he did to the loyal pawed buddy.